CAMROSE, AB (November 6, 2015) – The Brooks Bandits (12-4-2) battled back from a 4-0 deficit to tie the Camrose Kodiaks (13-3-3) on Friday afternoon, but fell just short on a late tipped point shot by the home side to fall three points back of first place in the AJHL South, with a game in hand.

“I think we deserved at least a point, maybe two,” said Bandits head coach and general manager Ryan Papaioannou. “I thought we dominated the hockey game, almost all sixty minutes of it.

“Every time we made a mistake, they capitalized.”

Camrose capitalized on its first mistake at the 8:37 mark of the game when Cam Gotaas scored on a breakaway, tucking a low backhand shot between the pads of Josh Davies (Guelph, ON) to make it 1-0. With just under 2 minutes to go in the opening frame, a T.J. Brown shot from the top of the right-wing faceoff circle doubled the Kodiak lead on the power play. Tempers soon boiled as Nick Prkusic (Medicine Hat, AB) and Nelson Gadoury dropped the gloves and were ejected after a spirited fight, but the Kodiaks responded with a goal just a few seconds later, a Liam Motley breakaway wrister, to make it 3-0 after 1.

But as much as the first period belonged to the Kodiaks, the second belonged to the Bandits, who outshot Camrose 21-3 in the frame. The first 8 shots of the period all went to Brooks, but Patrick Gora stopped them all, before the first Kodiak shot of the period resulted in a goal on a Scott Ferguson net front tip at 7:45. But a spinning backhand shot by Josh McKechney (Calgary, AB) on the power play at 12:35 got the Bandits on the board. At 15:05, Parker Foo (Edmonton, AB) tipped a Charlie Marchand (Calgary, AB) centering pass to cut the deficit to two, and exactly three minutes later, Hayden Ursulak (Calgary, AB) one-timed in a feed from behind the net by Austin Wright (Niagara Falls, ON), to pull Brooks within one.

In the third, Dylan McCrory (Kirkland, PQ) tied the game on a centering pass from the left-wing corner that deflected off of Camrose defenceman Trevor Costello and into the net; he was set up by Jared Cockrell (Byfield, MA) who extended his point streak to 7 games with the assist.

But with 4:03 left in the final frame, a point shot by Stephen Wack ricocheted off of Mackenzie Bauer and bounced past Davies, into the Bandits net for the eventual game-winning goal.

“We’re slowly getting better now,” said Papaioannou. “We seem to be turning certain pages that we were struggling with for a long time, and they’re all positive steps forward.”

Next up for the Bandits is a Sunday matinee against the Calgary Canucks, a team they defeated 6-2 at home last Saturday night. Game time is at 2 PM at the Max Bell Centre in Calgary, with pre-game coverage starting at 1:45 on Q105.7. 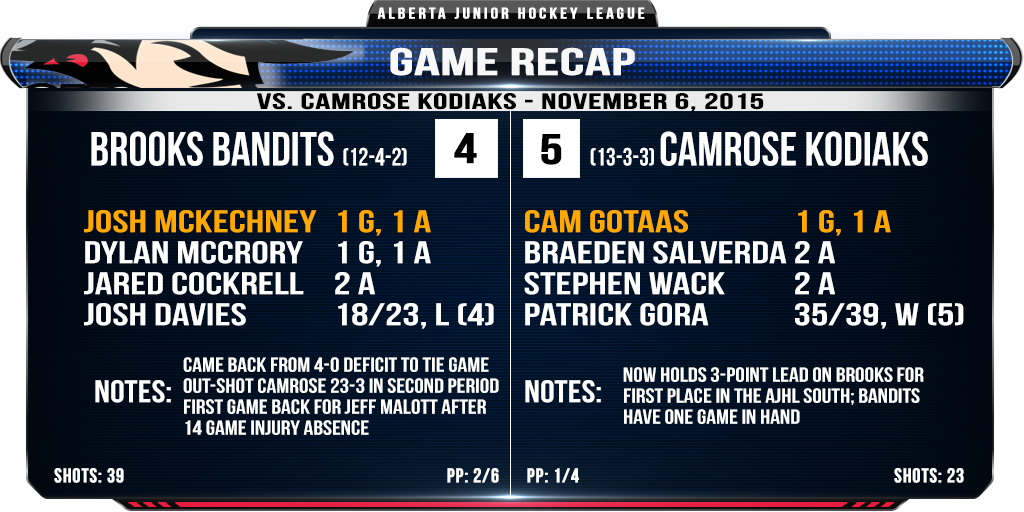